FoodBall and BlueBlood Steakhouse are pleased to offer a curated Father’s Day gift box, and have it delivered right to his door.

Located inside Toronto’s majestic castle, Casa Loma, BlueBlood Steakhouse offers a modern take on the classic steakhouse.  Bring BlueBlood home with the gift of 4 hand forged BlueBlood engraved steak knives, bottle of Vigneti del Salento Vigne Vecchie Leggenda Primitivo di Manduria, and a $50 gift card to BlueBlood Steakhouse. The gift box also includes a delicious recipe for the perfect ribeye steak and mashed potatoes from Chef Scott Saunderson, should you choose to recreate the meal on your own. 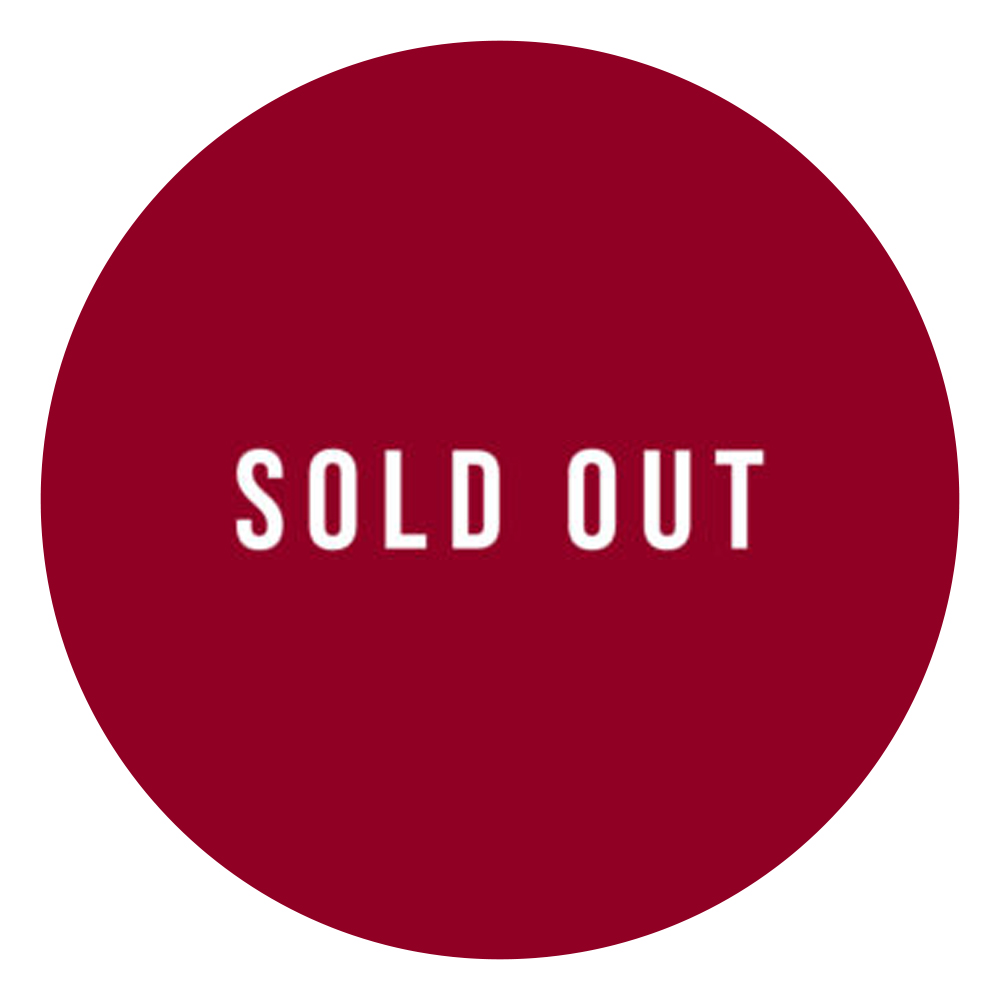 In time for BBQ season, deliveries will begin May 1st, 2020. 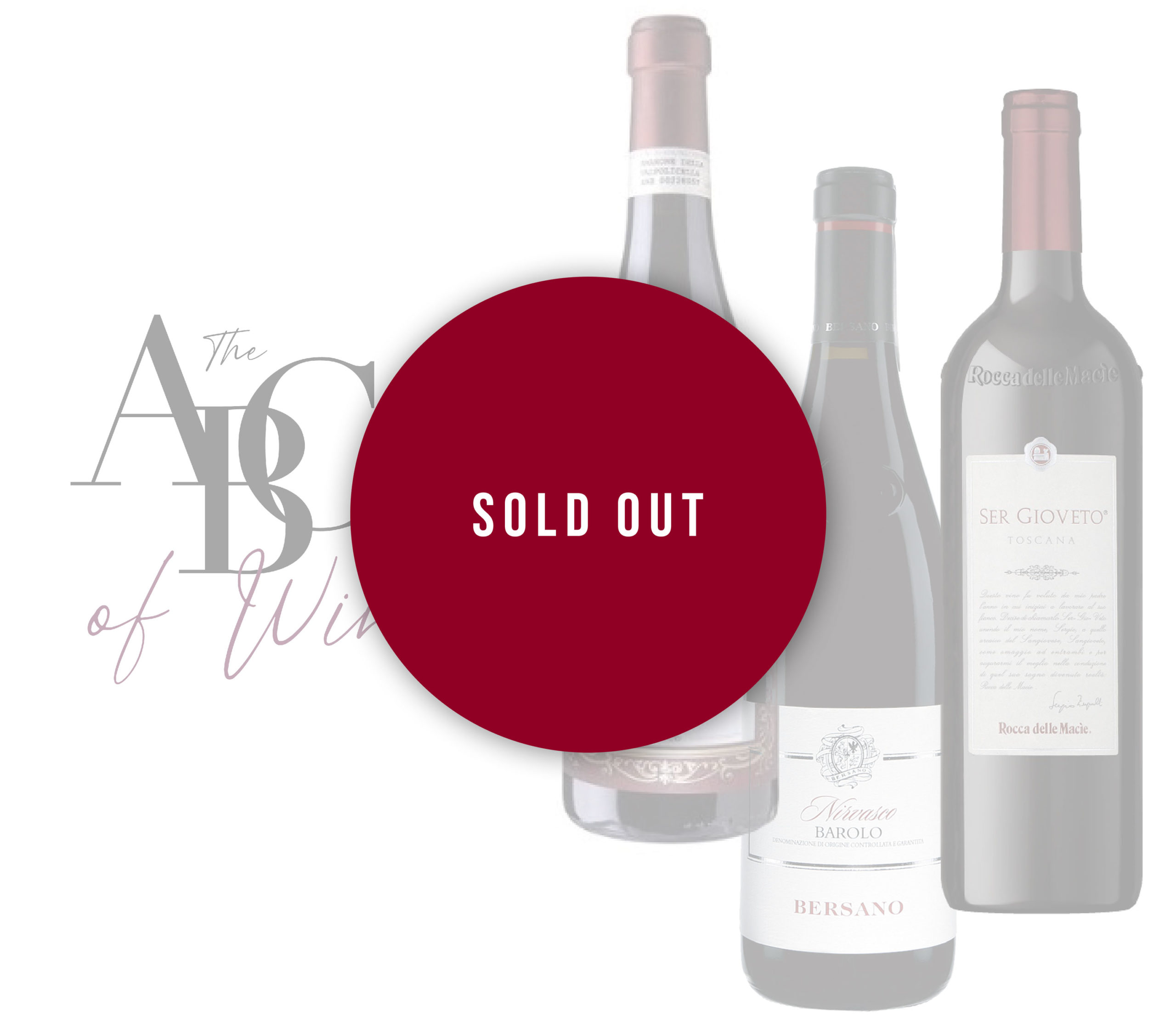 A perfect example of Lodi terroir, this Pinot expresses big fruit and ample richness for the varietal. The nose pops with lots of floral tones, cherry, raspberry and hints of blackberry. The blackberry notes, from the blended Zinfandel, gives this wine its distinct Lodi character. The palate is soft and round, with good weight for the varietal, yet still maintains the gentle acidity in the mid-palate that is distinctly Pinot.  Frankie and Johnnie Wines have teamed up with Oak Ridge Winery, to produce and bottle Solid Ground. Built in 1934, Oak Ridge Winery is the oldest operating winery in Lodi, California. The wines are made from 7,500 acres of estate vineyards throughout the Lodi American Viticultural Area (AVA), situated between the Sierra Navada foothills and the San Francisco Bay. The area’s uniquely Mediterranean climate, with warm days and coastal evening breezes, is ideal for the cultivation of world-class wine grapes.

This Lodi Cabernet has rich berry fruit with oak and vanilla notes. With hints of baking spices, it reminds one of a mouthwatering berry pie, tasty crust and all. It has a medium body and gentle tannins making for very pleasurable wine drinking.  Frankie and Johnnie Wines have found great value and exceptional quality from old vines in Lodi, California to produce Headwind. The wines are made from 7,500 acres of estate vineyards throughout the Lodi American Viticultural Area (AVA), situated between the Sierra Navada foothills and the San Francisco Bay. The area’s uniquely Mediterranean climate, with warm days and coastal evening breezes, is ideal for the cultivation of world-class wine grapes.

The secret to a good burger and maintaining the shape is to mix the ingredients , form and let the patty rest overnight. Reserve seasoning until right before placing on the grill. 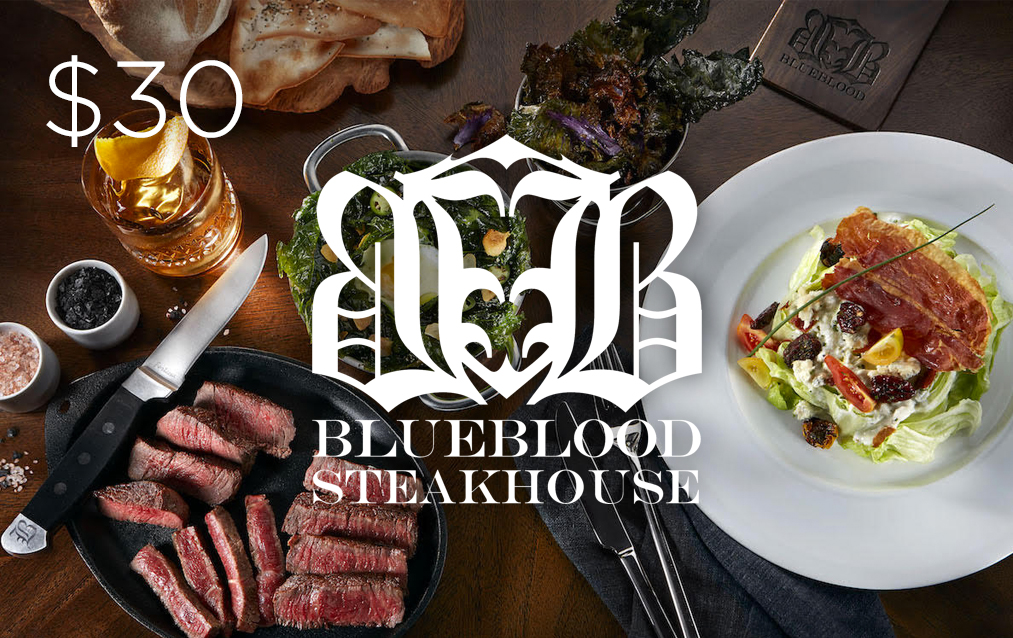 Valid for takeaway or in-restaurant when BlueBlood reopens. 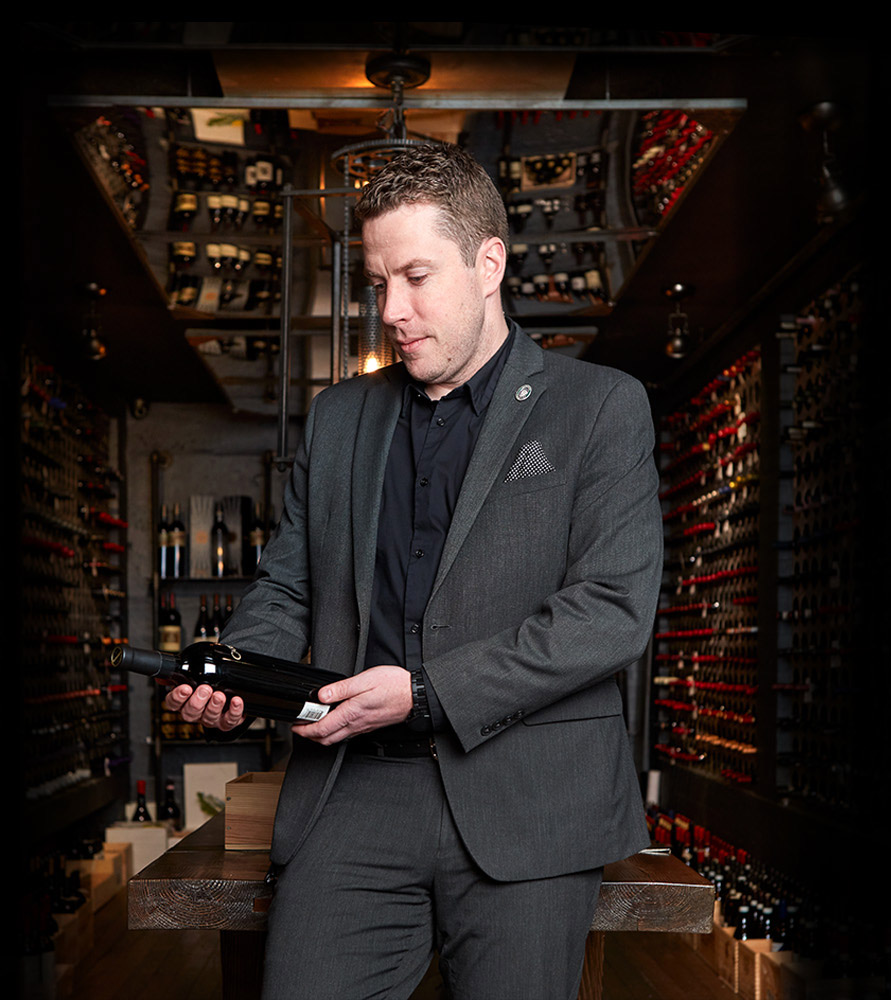 Recipes brought to you by FoodBall’s featured Chefs from 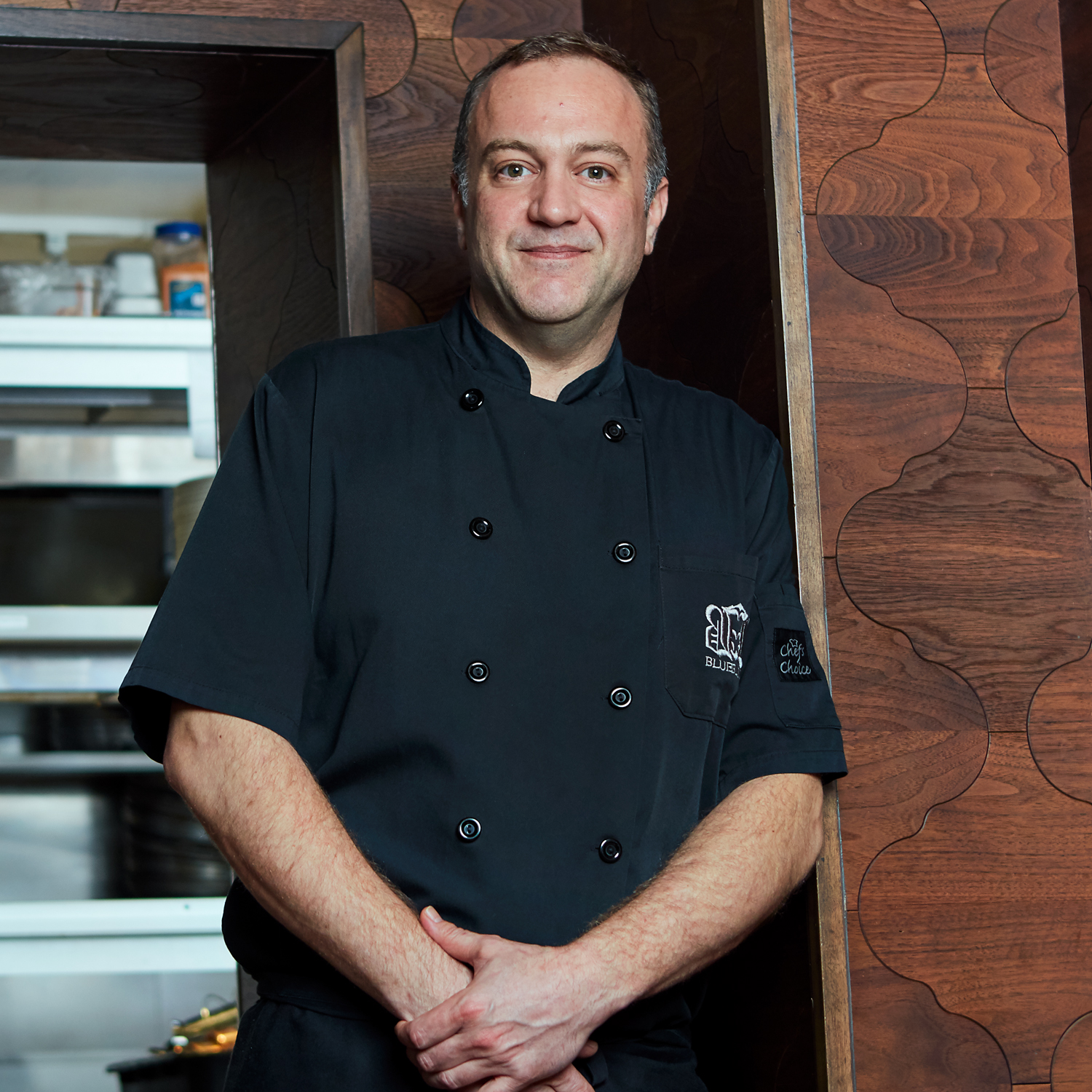 As a native Italian and raised by first generation Italian parents, Chef Saverio Macri’s passion for Italian culture and cuisine were nurtured from a very young age. Saverio’s first years in the kitchen were spent training in various trattorias in Tuscany, Italy which has immensely influenced and shaped his culinary journey.

With an interest in culinary arts and science, Saverio began his professional studies in the United States at Virginia’s Averett University, where he graduated with an Honors Bachelor of Science Degree, specializing in food and nutrition. His culinary voyage led him north soon after, and he enrolled in the Culinary Management Program at George Brown College in Toronto, Ontario.

His science foundation combined with his enthusiasm for Italian gastronomy, proved to be a powerful force in the kitchen. Saverio has immersed himself in all facets of culinary arts, competing in many prestigious Canadian competitions alongside world renowned chefs. Most notably, Saverio has displayed his talents in the National culinary competition, Gold Metal Plates, which celebrates excellence in Canadian cuisine, wine, arts and athletic achievement and the Grand Cru Culinary Wine Festival, a spectacular culinary event that raises money for the University Health Network in Toronto.

Michelin-stared Chef Scott Saunderson has built an extraordinary portfolio that includes extensive experience within Fine Dining, Private Club and Bistro Fare. Chef Scott’s expertise in French cuisine is quite evident as the refined technique and finesse of this widely respected style of cooking has translated remarkably into his work as Executive Chef of BlueBlood Steakhouse at Casa Loma. Prior to joining Liberty Entertainment Group in 2019, Chef Scott proudly built a resume which includes a roster of prolific restaurants. Most notably, Michelin Star restaurant Manley in Storrington, Sussex where he worked as Head Chef. Chef Scott has shared his passion and talent for cooking while working in both Canada and the UK. He confidently brings his talent, professionalism and unique craft to the BlueBlood Steakhouse kitchen where his role as a leader is both respected and valued. With great attention to detail, Chef Scott prides himself in his meticulous process of planning, preparing and executing impeccable dishes that are both appreciated and celebrated.

One of Canada’s most celebrated and visionary chefs, Claudio Aprile was born in Uruguay, grew up in Toronto, and has travelled, lived, and worked internationally. He has spent his professional life in kitchens working through the ranks becoming the successful restaurateur that he is today. Throughout his 30+ year career, Aprile has passed through some of the most renowned kitchens around the globe. Bali Sugar in London earned him outstanding reviews as a young executive chef where he received local and international critical acclaim. On returning to Toronto in 2000, Aprile cemented that reputation at Senses in Toronto, where he wowed critics and diners alike with his innovative use of experimental cooking techniques. Since 2014, Aprile has appeared as a judge on the highly successful MasterChef Canada series on CTV.